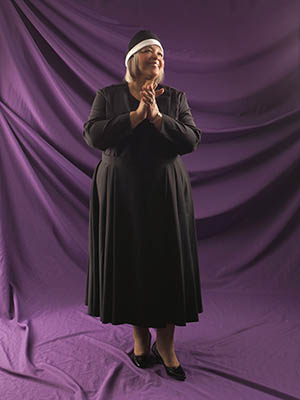 Evangelist/Missionary Cynthia Edwards is a native of Buffalo New York, and was born January 21, 1952. Her mother, who was a former concert pianoist, won many awards for her music at a young age. Soon she saw the musical ability in her daughter, and invested in giving her voice and piano lessons. Raised in the Catholic church Cynthia began to blossom but in her heart, something was still missing in her life.

In 1970 Cynthia left home and went to Hostos Community College in New York and stayed with her mother. She also sang and played the piano with her mother who taught many choirs in various churches all over the city. In about three years when it was time for Cynthia to graduate, her mother decided that New York was too dangerous for her to further her career, and decided to send her to Hampton Institute in Virginia to further her education in Music and Sociology.  Although the plan was to be a Social Worker, God had another plan. In 1973 she was introduced to Jesus Christ by the Youth for Christ Campus Crusaders and later received the Baptism of the Holy Ghost.  "The Lord gave me instruction and direction and I have a purpose in life now, Cynthia quotes. Soon in 1976 the Lord led her to join St. John Church of God in Christ where the honorable Bishop Samuel L. Green pastored. There she learned that God had a beautiful life for her if she would serve him with her talents and obey God's word in the way of holiness.

Through trails and tribulation the journey began. And forty three years later she has learned how to live the life and to walk with God and trust him no matter what.  When she sings you can feel the anointing which only comes through suffering for Christ sake.   For her faithfulness the pastor gave her the privilege to be one of the lead soloist on the Faith for Living Television Programs every week and the Faith for Living Richer Life Ministry radio broadcast which aired every day for some time. One morning the anointing came on the pastor and he said to her, one day you are going to sing to the world and I need to prepare you to sing before great multitudes.  I am going to assign you to sing every Sunday over the offering and with this platform you will learn how to minister to the people, and when you are ready he will open doors for you. He will equip you with everything. You won't have to work for it, he will just put it in your hands because of your faithfulness to him. Cynthia was speechless, but believing in the man of god she did what he said.  She traveled with her choir and sang in conventions, dinners, luncheons, dedications, Holy Convocations and the like. Because of being in this ministry I have been exposed to sing to thousands Cynthia says. Her greatest joy was when the Pastor took the choir to San Juan to sing at the Spanish Holy Spirit Christian Renewal Conference.  The Lord also blessed her to sing and play for the anointed services for years at the church on Tuesday and Friday night on the organ and piano. She quotes I believe in staying on my post for the Lord.

Her expertise also blessed her to teach the hymns to the Children's church Choir under the awesome leadership of Gloria Walker, and counseling on the prayer lines. I love being a prayer warrior "Cynthia says. She has also traveled to the Women's Convention of the Church of God in Christ and sang in the International choir and also the Mason Memorial International choir during the Holy Convocations through the years. In 1997 she married her beloved husband Henry.  Eighteen years later he is now better known as Elder Edwards.  She has two children, Melody and Rebecca and a grandson name Paris.  Now in 2016 she was blessed to go to TBN in Nashville and record her album full of hymns and spirituals called "Its Time" and she has distribution with SJM Productions.  Her desire is to travel the world with her and her husbands ministry. She quotes " as I waited on God for direction he just simply said "Its Time.